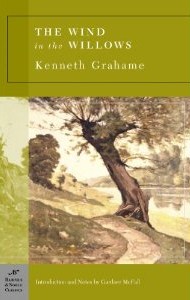 The Wind in the Willows by Kenneth Graham

Post number thirty-four is for Kenneth Graham's The Wind in the Willows. As with nearly everything else I read nowadays, this was a requirement for my History of Children's Literature course. What follows is my reading response journal entry for the book.

I had never read The Wind in the Willows prior to this course. I had never even seen the entirety of the Disney film (my only other exposure to the story), although I do remember seeing somewhere a picture of a Toad in a motorcar. I don't want to say that I was surprised by the book, but in a way I was totally unprepared for what the book was even about. I knew it had animal main characters, and took place in a rural area: I didn't even know the book was written by a British author! So this was an entirely new experience for me, which is rare, as I have at least had a general idea of what the books assigned for this course were about.

Our discussion in the on-campus session about what makes a book a classic got me really thinking about The Wind in the Willows especially, which is why I chose the title for my reading response. We discussed that the books have characters that are engaging and easy to relate to, and we also discussed the books having good, sound writing. However, while reading this book, I was struck by the fact that – in my case at least – this was not the case with this particular book. I didn't find the characters terribly engaging: the Toad annoyed me immensely, mostly because of his inability to learn from his mistakes, and while I liked the Mole and the Water Rat a lot, they're not "memorable" to me. I don't think I'll reread this story again – which was another part of a book being considered a "classic" – although I will admit that the fact that I'm writing a reading response for this story pretty much means I am still thinking about it after the fact.

In terms of good, sound writing, Graham had a tendency to write very long sentences. In some cases, one paragraph was made up of only one sentence! This is not terribly grammatically sound, in my opinion, and is something that we try to get our students NOT to do when they're writing at school. I do love the amount of detail he gets into the story, and his adjectives for describing the animals' surroundings were kind of interesting and different. But at the same time, I think his metaphors would go over the head of a child, particularly when he starts going on about the wine (I think he called it "pleasure from the South" or something along those lines) or the flowers, or whatever else he's describing at length.

The girl I stayed with while I was on-campus is a Linguistics student. Knowing this, I read a paragraph aloud to her, and had to laugh at her reaction to the horribly long, comma-filled sentence that made up this paragraph. She was cringing before I'd reached the end, and couldn't stop herself from saying how horrid it was that he was writing in this manner. This was only one thing about the book that bothered me, though, but was the one featured most prominently, which is why I'm mentioning it here. Also, the version I had (the Barnes & Noble Classics edition) had really horrid illustrations; they were very dark and unclear/grainy, and didn't support the story text at all. If this were someone's first exposure to the story – as it was for me – this wouldn't have been a very nice reading experience. That being said, I also read parts of the story from a full-color illustrated version, and that really enhanced the story to the best degree. Also, the verbiage had been changed to something that was more child-friendly, so that version probably would help a child enjoy the story much more so than the version I read.

That being said, I don't see any of my current students picking this book up and reading it in its entirety, even if I suggested it to them. The book was pretty long, and the jumping viewpoints/storylines are at times confusing to follow. All in all, I just don't feel that this book was all that great, and am wondering just what it is about this title specifically  that's made it stick around for so long and be so well-remembered and well-loved. Maybe if I'd had it read aloud to me, like Robin said she'd done with her children, it would be a different story. But, compared to The Secret Garden, which I enjoyed immensely, this one just fell flat.