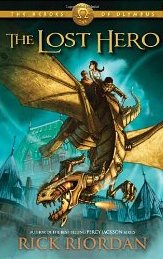 The Heroes of Olympus, Book One: The Lost Hero by Rick Riordan

I went on a Rick Riordan Read-A-Thon this week, so this book is the first of three all by the same author. Post number thirty is for Rick Riordan’s The Heroes of Olympus, Book One: The Lost Hero, which is a new series set in his same Percy Jackson and the Olympians universe, which I seriously adore. This book did not disappoint, and while I had some inkling of what was going on throughout, I was still really engrossed and did not want to stop reading. If you liked Percy Jackson, you’ll like the continuation of the series as well.

The book picks up with three new main characters – Jason, who is suffering from amnesia, Piper and Leo. They are attacked almost straight off by monsters (of course), and Jason manages to summon lightning to scare off the wind spirits. Annabeth shows up right afterwards, and she reveals that her boyfriend, Percy Jackson, is missing, and she was told that she’d find him if she found the guy with one shoe (which turns out to be Jason, whose shoe was blown off in the lightning blast).  Jason is very confused, as he doesn’t really remember anything except his name. The three go back to Camp Half-Blood with Annabeth, where Jason runs into Chiron, who definitely knows who Jason is and isn’t all that pleased to see him. Meanwhile, Leo gets claimed by Hephaestus, Piper by Aphrodite, and Jason finally remembers enough to know who his father is – Jupiter, or Zeus, hence the lightning blasts. There are several things thoughout that point toward who Jason really is and where he comes from, but he doesn’t figure it out fully until the end. Leo, meanwhile, has his own secret: he can summon fire, which is an ability that a child of Hephaestus hasn’t had since the 1666 Great Fire of London. Piper also has a special ability – charmspeak – and secret: her father’s been kidnapped and is being held by a Giant, who says she has to betray Leo and Jason if she wants to rescue him.

Turns out that Jason is the son of Zeus in his Roman form, which is why his father is Jupiter rather than Zeus. They finally figure out that Percy is most likely at the Roman camp, and also probably suffering from amnesia, just like Jason. The gist is that Hera has swapped the two camps’ leaders in order to help them come together and work as a team to defeat Gaea, who is waking up and wants to destroy the world. The only way to keep her asleep is to defeat the giants, which can only be done when a demigod and a God/Goddess join forces. Rachel’s great prophecy from The Last Olympian comes into play, and it’s determined that Piper, Leo and Jason are three of the seven greatest demigods. Percy is another, as well as some of the kids from the Roman camp (I would assume). Throughout all this, Jason, Leo and Piper are given their own quest, which is what they’re working on throughout the course of the book while trying to figure everything else out, and they come into contact with cyclopes, many minor Gods, including those that deal with the weather, and Medea, the witch who married the original Jason (of the Golden Fleece fame).

I pretty much inhaled this book. I couldn’t put it down, and of course, now that it’s over, I can’t wait for the next one, which isn’t released until October. Go figure. :-P I read the first chapter of the second book, The Son of Neptune, and was pleased to see that it’s from Percy’s pov, although he can’t remember anything but his name and a little tiny bit about Annabeth. He thinks his father is Neptune – Poisedon in his Roman form – because that’s what the gorgons chasing him tell him. He can’t remember his dad, which makes me sad because I love Percy and Poisedon’s relationship in the previous series. He also can’t remember why Annabeth is important, just that he knows she must be.

This series is another five-book set, which makes me wonder what exactly is going to happen. Jason is easily accepting of the Camp Half-Blood kids, and their Greek moms/dads, but he says the Roman camp may not accept Percy as easily; however, Percy knows what he’s doing, so I imagine he’ll find a way to earn their respect. I just wonder what’s going to happen when the two camps come face-to-face; Hera tells Jason that “her family  has been apart for too long”, which is kind of sweet, but the fact that a lot of the other gods think Hera is nuts to try to bring them back together doesn’t necessarily bode well. Regardless, I anxiously await the next installment; is it October yet? :-P

This entry was posted in Books and tagged book review, mythology, percy jackson. Bookmark the permalink.