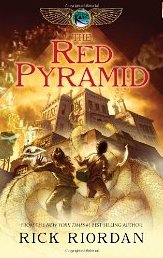 The Kane Chronicles, Book One: The Red Pyramid by Rick Riordan

Post number thirty-one is for Rick Riordan’s The Kane Chronicles, Book One: The Red Pyramid, the first book in a new Egyptian mythology series set in the same universe as the Percy Jackson/Heroes of Olympus books. They do not have the same characters, but there are slight mentions of things like not wanting to go on the other side of the river (into Manhatten) because of “other powers” in play, and a mention by Sadie of Carter seeing a “flying horse”, etc., that help you know that all three of these series are happening at the same time.

The main characters are Carter and Sadie Kane. Their father is an Egyptologist, who travels all over the world studying Egyptian artifacts. He has custody of Carter, while Sadie lives with her grandparents in London. Carter and Sadie’s mother was killed when they were young. The book is told like a tape recording, where Carter and Sadie recount their adventures into a microphone, which is transcribed into the book by the author, Rick Riordan, who says he “received the tape” in the mail.

The book opens with Carter and his father on their way to pick up Sadie for their one visitation day. Their father takes them to the British Museum, but along the way gets into an argument with three different people, who all want to stop him from doing whatever he’s trying to do. When they get to the museum, he gets permission from the curator to see the Rosetta Stone. He tells Carter and Sadie to lock the curator in his office and to stay out of the room. However, they don’t listen so are there to witness him writing hieroglyphics and summoning something out of the stone. That something turns out to be the five main Gods/Goddesses in Egyptian mythology, including Set, who immediately traps their father (who has melded with the spirit of Osiris) in a gold sarcophagus, which is exactly what Set did to get control of the world when the Gods were still in power.

Turns out that their father wasn’t the only one to meld with the Gods, as Sadie has ended up hosting Isis, and Carter ends up with Horus. This is against the rules of magic – they call this “the path of the Gods”, which has been closed for many years because it is very dangerous to host Gods because they can burn up your essence and kill you. So they are immediately put on the House of Life’s (ie the magicians) “most wanted” list. Their uncle, Amos, whisks Carter and Sadie off to New York, where he hopes to train them in magic and find a way to save their father. They’ve hardly been there very long at all, however, when Carter has a dream that shows Set in Phoenix trying to raise a red pyramid (hence the title), where he can focus his power. He wants to capture the other three Gods – Horus, Isis and Nephthys – and consume their power so he’ll be ruler of the world. Amos decides to go to Phoenix, where he’s captured by Set. The house in Brooklyn is attacked and destroyed, and Carter, Sadie and Bast (the cat goddess) – who has been working for the Kane family ever since Carter and Sadie’s mom was killed – escape, although not for long. The rest of the book involves Carter, Sadie and Bast trying to get to Phoenix to stop Set. Along the way they run into the House of Life, whose leader, Iskander, offers them sanctuary but then dies, leaving Dejardins in charge, who immediately declares that they should be executed. They end up fleeing across the US to Phoenix, where they run into numerous Gods/Goddesses, are nearly killed several times, and squabble rather nonstop with Horus and Isis, who both want to take over Carter and Sadie’s bodies and do things their way (another reason why it’s not a good idea to host a god).

This book didn’t read as fluidly as Percy Jackson or the first Heroes of Olympus book, because they really packed a lot of information about Egyptian mythology into the narrative, usually in the form of Carter telling his sister something she didn’t know. The humor wasn’t quite up to par, either – Percy is hysterical, and it’s kind of hard to match up with that, although there were some moments here and there that made me LOL. However, the book was very enjoyable, especially when the kids got into their actual journey to stop Set. There were twists and turns throughout as well, including some things I definitely didn’t expect, which kept me engaged and anxious to see how things would turn out. It was engaging enough that I immediately read the second book, and of course now have to wait until next May before I get the third (and final) installment.

This entry was posted in Books and tagged book review, mythology. Bookmark the permalink.