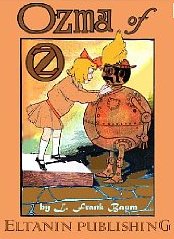 Post number thirty-five is for L. Frank Baum's Ozma of Oz, which was a required reading assignment for my Fantasy Lit/Media course. The book was the basis for the movie Return to Oz, which I liked a lot, so I was intrigued to see what the source material was. Needless to say, there were a number of differences, although it has admittedly been a long time since I've seen the film.

So Dorothy (and a hen named Bill[ina]) returns to a magical world which is not Oz but Ev. There she meets Tik-Tok (just like the film) and some strange creatures called Wheelers (also from the film), and sets out for the land's castle to meet a princess who has many different heads that she changes regularly (also from the film, but in the film she was the villain and in the book she is not). She then sets out to save the royal family from the Nome King, who has turned them into ornaments with which to decorate his castle. Ozma of Oz – the new leader of Oz – shows up and lends a hand, as do her friends the Scarecrow, the Tin Woodman and the Cowardly Lion.

I always loved Tik-Tok in the film, and loved him just as much in the book. I loved how he would ask Dorothy to wind up his thinking device so he could think of a way to help them out, and I loved it when he used her dinner pail to beat down the Wheelers. The book was more light-hearted and bright than the film – I do remember how dreary everything was with the Emerald City in ruins, and the scary princess with the multiple heads trying to take Dorothy's head, although that's pretty much all I can remember as it has been a long LONG time since I've seen it – and I liked that Dorothy was pretty intelligent about most things, even though she sort of goes about trying to free the Royal Family and the members of Ozma's group from the Nome King in a pretty haphazard way (thank goodness for Billina!). I also liked seeing the old characters again, and I liked that she and Ozma worked out a way to return her to Oz if she wanted to come back. I just purchased all the Oz books from Amazon for my Kindle for only $.95, so I look forward to reading the rest of the series, sometime in the future when I actually read for pleasure and not class again. :)