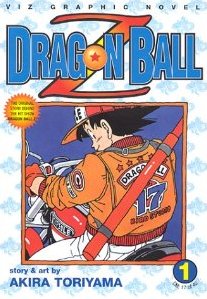 Post number thirty-eight is for Akira Toriyama's Dragon Ball Z, Volume 1, which was another required reading assignment for my Fantasy Lit course. I am a HUGE fan of the television series for this anime – like, a ridiculously huge fan, seriously – so this was kind of fun to re-"read" something that I am already really familiar with, even if I hadn't seen it in this format before.

I'm not going to get too indepth, and I'm not going to put spoiler spaces in, because this WAS a TV show for several years, and probably anyone who is already interested in has already seen and/or read the storyline.

So in Volume 1, you're introduced to Goku, who is one of only four remaining members of the Saiyan alien race. In the book, Goku has brought his son, Gohan, to meet his old teacher Master Roshi (who goes by another name in the book, but I'm using TV terms here), and to introduce him to his friends, Krillin and Bulma. However, their happy reunion is interrupted by the appearance of Radditz, Goku's brother (who Goku knows nothing about). Radditz kidnaps Gohan, and tells Goku that he either kills one hundred humans or Radditz will kill Gohan. Instead, Goku teams up with Piccolo, and the two of them decide to battle Radditz and attempt to defeat him. Which they do, except it results in Goku's death, but in this universe that's not really anything to fear (at least, not the first time :D), because you can be revived by bringing all seven Dragon Balls together and having the person who joins them make a wish to bring you back from the dead. So the story ends with Goku dying and Krillin promising to use the Dragon Balls to bring him back. What's funny is that the story is told in 151 pages in the manga, but on the television show, it took tons of episodes. It's definitely faster to get through the series in book form than by watching the anime, I think!

I might read the rest of these at some point, but definitely not right now. I have the first four seasons of DBZ on DVD, so will probably just watch those instead. :)

The only downside to the beginning of the series is that my favorite character is Vegeta, who doesn't show up until Volume 2, and is decidedly evil. I like him much better once he's married to Bulma and "friends" (although he'd deny it) with Goku. Those two together are fabulous. <3