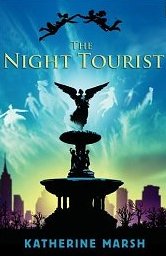 The Night Tourist by Katherine Marsh

Post number sixty-three is for Katherine Marsh’s The Night Tourist, which was a title from my Greek Mythology Reader’s Advisory. It’s basically a retelling of the myth of Orpheus and Eurydice, set in modern-day New York City. I really liked this book; it was better than The Goddess Test, not only in terms of the story itself but also because of how faithful Marsh stayed to the original myth.

So the main character in this story is Jack, who is a classics student quite adept at Latin translations. His father is a professor at Yale, and his mother died several years prior to the start of the book. One day Jack is hit by a car, and wakes up with a curious condition: the ability to see the dead. This leads him NYC, where he meets a doctor-friend of his father’s, and then runs into a dead girl – Euri – while at Grand Central Station waiting for his train. Euri says she’ll give him the tour of hidden places at the Station, so he follows her and wides up in … the Underworld. :))

What follows is Jack’s journey to find his mother – he’s sure she’s still there and hasn’t “moved on” to Elysium – and also his attempt to bring Euri back to life. Not only do you get a look at the Greek myth, but also hidden aspects of NY that most people don’t know. Jack and Euri’s nightly journeys around town are full of landmarks and high points, but also hidden clubs and other places. Throughout it, you get to know Euri and start feeling really sorry for her; she desperately wants another chance to live. There are some rules that they have to adhere to, like not eating the food of the dead, and the fact that Jack can’t fly/travel through objects/etc without Euri’s help. The big thing, though, is that Jack is breaking a major rule by even being there in the first place, so while they’re trying to locate his mom and figure out a way to bring Euri back, they have to keep ahead of Cerberus and Clubber, the main guard of the Underworld. There were some pretty poignant parts to this book, particularly when Jack does finally find his mom, and also when you find out the truth of Euri’s past. The ending – while sad and disappointing in romantic terms – kept completely in line with the original myth and everything was really just perfect. I have no quibbles about this book whatsoever, and am looking forward to reading the sequel.

This entry was posted in Books and tagged book review, mythology, reader's advisory. Bookmark the permalink.