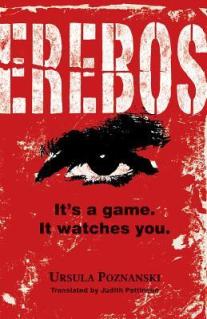 When 16-year-old Nick receives a package containing the mysterious computer game Erebos, he wonders if it will explain the behavior of his classmates, who have been secretive lately. Players of the game must obey strict rules: always play alone, never talk about the game, and never tell anyone your nickname.

Curious, Nick joins the game and quickly becomes addicted. But Erebos knows a lot about the players and begins to manipulate their lives. When it sends Nick on a deadly assignment, he refuses and is banished from the game.

Now unable to play, Nick turns to a friend for help in finding out who controls the game. The two set off on a dangerous mission in which the border between reality and the virtual world begins to blur. This utterly convincing and suspenseful thriller originated in Germany, where it has become a runaway bestseller.

Erebos earns the distinction of my first-ever received e-galley! So exciting. :)

This book is about Nick, a high school senior living in London, England. Nick starts noticing that his classmates are acting strangely; they’re skipping school, coming into school looking exhausted, acting secretive, talking to people they never used to talk to before, and are passing around a DVD to each other. Nick wants to know what’s going on, and is finally invited to join in. The disk is a computer game called Erebos, which is incredibly realistic and makes you lose all track of time and place. In the true form of an addiction, Nick loses the ability to function outside of the game. The catch here, though, is that the game interweaves itself with your real life, and seems to know way more about you than it should. It asks you to take care of tasks or quests out in the real world in order to continue to level up your character. And it definitely tests your morality.

The first thing I should mention about this book is that it was translated from German into English. It was placed in London, but there are some decidedly un-British things and/or words/phrases used, like apartment vs. flat and referring to himself as a high school senior, which is a decidedly American term. Also, the phrase “full stop” (i.e. period, end of discussion, etc.) is used multiple times, but is not something that Brits really say. This is not the author’s fault, but is instead the translator’s, though, so I was mostly able to overlook the occurrences.

I found this book to be incredibly engaging and had a hard time putting it down, which works well because that’s exactly how Nick feels about the game. He has twinges that perhaps things aren’t quite right, especially when he’s asked to carry out tasks in the real world, but the game has caught hold of him in such a way that he’s unwilling to not follow the directions for fear of the consequences. It’s only when he’s tasked with something extremely serious that he realizes he can’t do it, and when the immediate punishment comes (i.e. his getting kicked out of the game) he at first regrets that he didn’t go ahead and do it. He’s not a terribly sympathetic character, either, because he throws temper tantrums when he doesn’t get his way, calls people he considers beneath him “freaks”, and is generally spoiled and unpleasant. That being said, he definitely was realistic, especially his reactions to the game and what goes on while he’s playing it.

Much of the first part of the book is Nick as his RPG character going through the game. When Nick is playing, he becomes his character, so there are huge passages made up of things like “Sarius went up the hill” or “Sarius struck xyz with his sword”. As someone who is not an RPG gamer, I was surprised at how much I actually enjoyed what I read. I think this is a definite book for boys, so to speak, and would also be huge with gamers. But if my reading experience was anything to go by, probably anyone would like this book. The mystery and suspense are top-notch and completely engaging.

There was one plot line that made me cringe, though, when one of the characters accuses another of sexually assaulting her. The book focuses on the adverse effect this had on the guy, rather than on the girl, who is called a liar and is generally not believed. This is an epidemic anyway, and is why women tend to not come forward when something like this happens, and I didn’t like that the only focus was put on the guy and how it effected HIS life, and that she wasn’t taken seriously (nevermind that it didn’t actually happen; she did this because she was told to by the game, which has its own negative connotations). I also didn’t like that it wasn’t cleared up completely before the book ended.

Overall, I definitely liked this book a lot and found it completely mesmerizing at times. Once I got about 80% finished, the action kept coming and coming and I didn’t want to stop reading, much like Nick’s compulsion with the game. I felt like the climax was interesting and well-paced, and I really liked the character introduced toward the end; he was pretty amazing, although I would have liked to see him fleshed out a bit more. And the ending was a bit ambiguous, too; I would have preferred to have everything wrapped up neatly, although that’s probably not terribly realistic. Real life doesn’t always come wrapped up nicely with a bow, after all.

To sum up: good book, interesting (and somewhat scary in terms of the lengths people will go to) story line, compelling plot, and engaging narrative. A definite recommendation.

This entry was posted in Reviews and tagged book review, ebook, netgalley arc. Bookmark the permalink.