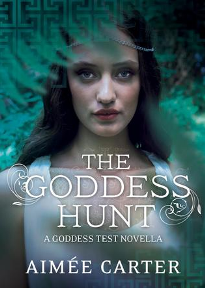 A vacation in Greece sounds like the perfect way for Kate Winters to spend her first sabbatical away from the Underworld…until she gets caught up in an immortal feud going back millennia. Castor and Pollux have been on the run from Zeus and Hades’ wrath for centuries, hiding from the gods who hunt them. The last person they trust is Kate, the new Queen of the Underworld. Nevertheless, she is determined to help their cause. But when it comes to dealing with immortals, Kate still has a lot to learn….

The Goddess Hunt takes place immediately after The Goddess Test, which you might remember I wasn’t the hugest fan of. (If you don’t remember, my thoughts on the book can be read here.) But it was only $.99 from Amazon (and is now free), and I was kind of curious to see what exactly Kate and James were going to get up to on her six-month sabbatical. And overall it was an okay story, although I again had moments where I went “WTF?” or rolled my eyes in irritation.

After the events of The Goddess Test, Kate is on her six-month sabbatical from the Underworld, and has decided to vacation in Greece with her best friend James (aka Hermes). However, James drops her smack dab in the middle of a millennia-old feud between Castor and Pollux, the Gemini twins, and the gods of the council, which occurred when Pollux broke Castor out of the Underworld. Kate is a lot more sympathetic to the twins, and decides that she must help them remain together, even though it goes against the ruling of the gods (particularly Hades and Zeus).

Not being the hugest fan of The Goddess Test, I pretty much went into this with no expectations, and I admit I liked it well enough. It wasn’t great, but it wasn’t terrible, either. Just sort of okay. There were some definite things I didn’t like – again, with the inconsistency of her mythology – but I will say that Kate was pretty awesome in standing up to Walter. She’s got a definite backbone, even if I can’t always stand her decision-making. Also, I enjoyed reading from Henry’s point of view; it was nice to get his thoughts on Kate, and I enjoyed the role he played in the ultimate finale of the Castor and Pollux mess.

However, the way Carter uses the mythology just BOTHERS me. I should be used to it – I did read The Goddess Test, after all – but some things are just SO FRUSTRATING that I can’t overlook them. (I feel like this is how the whole rest of the series is going to go for me, though, so I better get used to it if I am going to read the rest of the books, which as of right now I am planning to do; I have an ARC of Goddess Interrupted waiting for me on my Kindle.) For instance, it is BEYOND ME why Kate would think the gods and goddesses are these perfect beings who never make mistakes or have their own flaws. Did she not learn a thing from the “history lessons” that Irene made her read in the first book? The gods and goddesses are known for their human failings, and their very real faults – stories of said faults are littered throughout Greek Mythology, in fact. So where does this inability to see that they’re not always “good” or “right” come from? That, to me, didn’t make a bit of sense.

[SPOILERS] And also? I really don’t like James. It’s true that he’s Hermes, the god of tricksters and thieves, etc., so his behavior is a bit more in line with what we know about Hermes, but he seems to take great joy in causing problems for Henry, and I hate the way he plays on Kate’s emotions. And I also can’t stand Kate’s inability to see that that’s exactly what he’s doing. Drives me truly crazy. [/SPOILERS]

As a sidenote, The Goddess Hunt isn’t a stand alone novella at all, so if you haven’t read The Goddess Test, it won’t make a bit of sense. Just an fyi to anyone thinking about reading it.

This entry was posted in Reviews and tagged book review, ebook, mythology, novella. Bookmark the permalink.

2 Responses to REVIEW: The Goddess Hunt by Aimee Carter