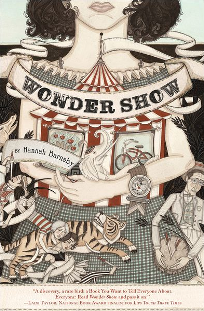 Ladies and gentlemen, boys and girls, step inside Mosco’s Traveling Wonder Show, a menagerie of human curiosities and misfits guaranteed to astound and amaze! But perhaps the strangest act of Mosco’s display is Portia Remini, a normal among the freaks, on the run from McGreavy’s Home for Wayward Girls, where Mister watches and waits. He said he would always find Portia, that she could never leave. Free at last, Portia begins a new life on the bally, seeking answers about her father’s disappearance. Will she find him before Mister finds her? It’s a story for the ages, and like everyone who enters the Wonder Show, Portia will never be the same.

When Portia Remini is taken to McGreavey’s Home for Wayward Girls and put under the “care” of Mister, the only thing she can think about is escaping and finding her father, who left her when she was young. When a traveling circus-slash-carnival comes through town, Portia decides that the best place to hide from Mister and start her search is as a member of the carnival, where she is one of the so-called “normals” amongst all the circus freaks. And thus begins Portia’s search for answers, and most of all, herself.

I really enjoyed this book. I found Portia to be a very real character: a girl who has been deserted and left behind her entire life, who grew up with a love and gift of storytelling, who only wants to find her father and be reunited with him. Instead she’s put into a horrible situation at Mister’s, and after a terrible event, can no longer stand to be there. So she escapes on a red bicycle and takes shelter with a traveling carnival show. I found her to be so incredibly strong; she has dealt with one blow after another and never gives up hope, even when things seem out of her control and falling apart. Portia was really the strength of this story for me personally, although the entire thing was really well put together.

I also liked the fact that the surrounding characters, from the two girls she becomes closest to at the Home to the various people populating the carnival, were all fleshed-out with their own back stories. I liked the glimpse of what it was really like to be part of the bally of a 1939 circus, which had already reached its heyday and was slowing dying out and winding down. The book is told mostly from Portia’s point-of-view, told in third person, but has first person chapters from some of the characters, from Gideon, who becomes Portia’s closest friend, to Jim the giant and Jimmy the dwarf. I liked the fact that the third-person voice was always slightly removed, telling it like it was, while the first-person narrative really allowed you to see exactly how the character was feeling. It added something special to the story that just made the book even more engrossing and interesting, and was something I personally hadn’t seen before.

[SPOILER] I also kind of loved the hint of a romance between Gideon and Portia, even though nothing REALLY happens. You could definitely tell that he cared for her, though, particularly when she’s taken back to Mister, and I liked their conversation at the end, and how Portia explained how his “mistakes” brought them together. I could definitely see something really special between them, and like to imagine that, in that world where stories continue even after they’re “over” that they got to have a happy ending together. But maybe that’s just the romantic in me. :) [/SPOILER]

This is very much a coming-of-age story, with a very strong, independent female lead who has some weaknesses but never completely allows them to bring her down. It’s about the search for a place in the world, someplace you can leave a mark–and someplace to call home. And it’s done in a really wonderful way.

This entry was posted in Reviews and tagged book review, historical, netgalley arc. Bookmark the permalink.