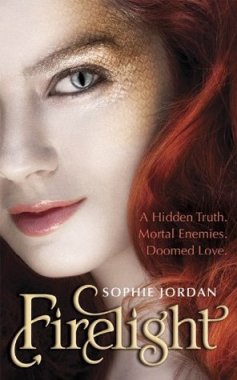 Marked as special at an early age, Jacinda knows her every move is watched. But she longs for freedom to make her own choices. When she breaks the most sacred tenet among her kind, she nearly pays with her life. Until a beautiful stranger saves her. A stranger who was sent to hunt those like her. For Jacinda is a draki, a descendant of dragons whose greatest defense is her secret ability to shift into human form.

Forced to flee into the mortal world with her family, Jacinda struggles to adapt to her new surroundings. The only bright light is Will. Gorgeous, elusive Will who stirs her inner draki to life. Although she is irresistibly drawn to him, Jacinda knows Will’s dark secret: He and his family are hunters. She should avoid him at all costs. But her inner draki is slowly slipping away;if it dies she will be left as a human forever. She’ll do anything to prevent that. Even if it means getting closer to her most dangerous enemy.

Mythical powers and breathtaking romance ignite in this story of a girl who defies all expectations and whose love crosses an ancient divide.

Firelight is one of those books that I’d seen advertised around for a couple of years but never got a chance to read, due to Grad School. The cover is so pretty that, when I saw it at my local library, I decided to give it a read. And I have to say that it was disappointing; I didn’t enjoy it nearly as much as I thought (and hoped) I would.

I read the synopsis and my initial reaction was, “Yay, something new that isn’t angels/vampires/werewolves!” And then I saw the mixed reviews and thought, “Hmm, maybe I’ll be one of those who loves this!” Oh, silly self. While this book isn’t terrible, it reminded me pretty significantly of Twilight and Hush, Hush, which I’ve read more recently. And I don’t say that as a compliment. Overall I found myself irritated with Jacinda, and only read the latter half of this book in order to mark it as finished.

I’m not going to go on and on about what I didn’t like, but here are a couple of brief summations: Jacinda was unbelievably indecisive. “I need to stay away from Will. I can keep my draki alive myself.” Then on the next page, “I couldn’t do this myself. I needed Will.” Lather, rinse, repeat. Also, we have another case of insta-love, in that Will sees Jacinda in the hallway and is instantly interested. And Jacinda’s been smitten with him since she first met him in her draki form. It was all a bit too much. Will is a bit of a stalker, too – he watches her from afar, visits her house late at night (and never mind that he convinced the school secretary to give him her address), picks her up unannounced for school one morning, etc. The one thing I will say about their relationship is that Sophie Jordan definitely knows how to write make-out scenes; Jacinda wasn’t the only one bursting into flames at Will’s touch. :-P

This entire book was one big, “I want to be with him but I CAAAAAAAAAAAN’T because we’re ENEMIES, but I NEEEEEEEEED him and can’t live withOUT him,”-fest and it got really irritating after a while. The only interesting bits were when when Cassian (who is the next alpha-in-line of the pride) showed up; he helped move the “plot” along, at least. But overall I was left with the impression that this book was a bit too long and far too heavy on the “forbidden love” theme. I would have liked to see more about the drakis and their world, instead of being thrust into a high school setting where the new girl gets the hot (and previously uninterested-in-dating) guy. I wanted more struggle for Jacinda to hold on to her draki ancestry, not an easy and sudden fix once she starts spending time with Will. I don’t know. This book just really didn’t do it for me.

Also, there were a few lines that made me think immediately of Twilight, and I will share one of those: “He’s an addictive drug to me that I can’t quit.” Hmm, sound familiar? As if we needed MORE to draw the comparisons between the stories.

I also had some problems with Jordan’s style of writing. She uses a LOT of sentence fragments, many of which were unnecessary and could have been combined to form an actual complete sentence. Here’s an example:

Crazy as it sounds, Will’s my refuge. Someone who knows everything about me. And likes me anyway. Loves me. Understands me. Isn’t out to change me. He’s the only one I can say that about.

Etc. And there’s a LOT more where that came from. I know that sometimes fragments can be used to the book’s advantage, but I just really thought it was overdone here. (And forgive me that I picked probably the most melodramatic passage in the entire book; it was on the same page as the quote above.)

I also had plenty of issues with Jacinda’s mom and her sister, although their points of view were perfectly understandable. And I won’t say anything else about this, because this post has gone on long enough and I really don’t like harping on about things I didn’t like.

Anyway, to wrap this up, this wasn’t a great book by any means. I found the main character irritating, the plot pretty formulaic and the surprises completely not. Portions of it were enjoyable, but the things I didn’t like definitely outnumbered the things I did. Definitely not going to rush out to read the sequel.

This entry was posted in Reviews and tagged book review, paranormal. Bookmark the permalink.