REVIEW: Of Poseidon by Anna Banks 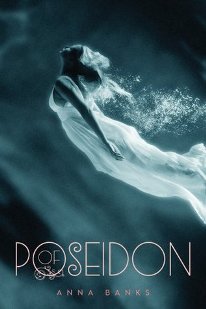 Galen, a Syrena prince, searches land for a girl he’s heard can communicate with fish. It’s while Emma is on vacation at the beach that she meets Galen. Although their connection is immediate and powerful, Galen’s not fully convinced that Emma’s the one he’s been looking for. That is, until a deadly encounter with a shark proves that Emma and her Gift may be the only thing that can save his kingdom. He needs her help–no matter what the risk.

Of Poseidon is one of those mermaid books that are populating the shelves in the year 2012. I have always been a fan of mermaid lore – they are secretive, alluring beings that exist in a world that humans can’t venture into – so I eagerly dove into this one. But almost from the get-go, there were just little things about this book that bothered me, and at times made reading it a chore. The mystery itself is good enough – Galen is a Syrena prince who hears about a girl who can speak to fish, so he goes looking for her because the ability to do so means she’s “of Poseidon”, and it was thought that that bloodline had died out. But then he finds her, and, instead of doing something new, this book tumbled headlong into typical YA paranormal fare.

Emma, our narrator, is another of those girls who is friends with the popular girl (who was also a bit too stereotypical African-American for my taste). She doesn’t realize that she’s pretty. She’s clumsy as all get out. And the first time she meets Galen, she literally trips into him, nearly killing herself on his “sculpted” chest. Emma also doesn’t realize that she’s anything special, or that she has this unbelievable ability. Galen is also your typical paranormal boy: ridiculously good looking, charming, the fastest swimmer ever, and a Syrena prince, plus he assimilates himself seamlessly into the human world, even though at the start of the book the author tries to make us believe that Galen has a hard time holding conversations with others, and admittedly, he did struggle. You know, for the first chapter or so. He’s also unbelievably rich. In other words, there was nothing special about Galen, at least not in my opinion.

Normally I would gobble up all the talk of the mythology that the author is using, and there were parts of the Syrena background that I loved (particularly the love story between Grom and Nalia). But I found the exposition on the history more like listening to a history professor, in that the facts were sort of just recited, sometimes rather dryly, so what should have been the best part for me also felt lackluster and uninteresting. I also had a problem with the Syrena take on marriage – marrying only to mate, not out of love – and the rather medieval look at women and their roles. Galen spends much of the time demanding that Emma listen to him because he’s royalty, and she –  in typical female human form – does the total opposite, and includes some tantrums as well. Then you had the whole rather icky relationship between Rayna and Toraf, in which they were mated without her knowledge or consent. I don’t care if she really did care for him all along, he shouldn’t have been able to get her eldest brother’s consent without her own involvement in the discussion.

Couple that with my annoyance with some of the phrases Emma uses throughout the book – like “ohmysweetgoodness” or “fan-freaking-tastic” – and my irritation was a constant presence. I also had trouble with Galen at the start; I think the reader is supposed to find him charming from the get-go, and maybe some people do, but I found him to be a liar and a manipulator for much of this book, until he’s finally forced to tell Emma the truth thanks to Rayna’s intervention (from this point on, I didn’t mind him as much, and he actually started to grow on me a bit). Their whole relationship  just really didn’t sit right with me, because Galen was not being entirely truthful with her, but Emma was just eating up all of his attention. We also have another instance of insta-love, and I get that there are  hints dropped as to why that is, but it was still yet another thing that made this feel like your typical YA paranormal. I do give the author credit, though, for not having Emma and Galen dive into any physical shenanigans straight away. It took 70% before we even saw them kiss, owing entirely to Galen’s back-and-forth in his own mind (in which he was trying to do the right thing), so kudos for that.

I don’t really want to call Emma stupid, because I’m not sure that you can really put this on her. She’s relying on Galen to tell her what’s going on, why she can talk to fish, etc., and he’s not telling her the whole truth. But she feels used by him, and tries to do the same with him except that it doesn’t work, because she likes him too much, and can’t help but be swept up whenever he looks at her, or smiles at her, or teases her. I have a problem when a guy’s favorite thing to do is make the girl blush, you know? And boy, does Emma spend a lot of time doing that in this book. I also had a problem with how quickly Emma forgets about Chloe once she realizes what she is and starts spending all her time with Galen and Rayna. Considering the knockdown, drag-out brawl that ensued when Rayna brought Chloe up, plus the fact that Emma’s entire existence prior to Galen rotated around Chloe, this was a little hard for me to believe, especially when Emma starts off the book lamenting the fact that everyone else at the school would probably forget her.

This book also ends in a most inopportune place. I get it – we’re being set up for the second book – but this book sort of has this massive reveal and then BAM we’re at the end. I’d seen enough people’s reactions, though, to expect it, so I wasn’t quite as upset as some readers have been with the abrupt ending. Still, not a whole lot is resolved in this book, and I have a problem with a book that didn’t seem to have much of a point aside from setting up for the next one.

If you’re reading this and thinking that I must have hated this book, I really didn’t. I don’t think there’s anything absolutely spectacular about it, but there were certain aspects that I did enjoy. Of Poseidon has an interesting plot, and I am curious about what comes next, and what the big reveal at the end will mean for the Syrena, and Galen and Emma specifically. I’ll just make sure I go into it with more tempered expectations.

An e-galley was provided by the publisher via NetGalley in exchange for an honest review. Quote taken from an uncorrected proof.

This entry was posted in Reviews and tagged book review, mermaids, netgalley arc. Bookmark the permalink.

2 Responses to REVIEW: Of Poseidon by Anna Banks