Zeus: King of the Gods (Olympians #1)

Zeus: King of the Gods is a great start to the tales of the twelve Olympians. I loved how O’Connor used this book to set up the series. The reader gets to learn about how Gaea and Ouranos came to be, how the Titans and Titanesses were born, and how Kronos became king, and was eventually overthrown by his children. The tales were told in a very reachable way, so that anyone reading it could follow along. We get our first glimpse of Zeus the womanizer in this book as well, with his interactions with Metis (and as an aside, I particularly enjoyed her, as she was a character I was familiar with but didn’t have too much detail on). I also loved the little additions to the artwork in each of the panels as well, which showed glimpses of various side stories that are also part of the Greek myths.

One thing that really stood out to me in this volume was the author’s notes at the end, with the page citations that explained what was happening and how it connects to upcoming volumes of the books. It gave a great deal of background information in a short, concise way, and I found it to be very useful in supporting how the author came up with the versions of his stories. All in all this was a really solid start to a series that I, personally, am quite anxious to see to its completion.

Another solid addition to the Olympians series! I liked the fact that Athena’s tale was told via the three Fates, and I liked how the myths used were weaved together to give a clearer picture of Athena’s character. And I actually learned something new from this one, which was how Athena got the name of Pallas. Likewise, I hadn’t realized that Athena wore Zeus’ aegis. Considering my love of Greek myths, finding new information is pretty amazing!

I especially liked how O’Connor didn’t gloss over the rather dark details of the Olympians and how they came to be; this was seen first in Zeus and again here, where the stories are told fairly matter-of-factly, with just a few things sort of “blurred” out. It definitely helps make the stories more appropriate for a younger audience.

Hera: The Goddess and Her Glory (Olympians #3)

The third installment of George O’Connor’s Olympians series features the Queen of the Gods, and gives us a pretty good idea of why she’s so vindictive and vengeful in the myths. Of the three I’d read to this point, this one was my favorite: I liked that the author showed Hera’s journey from maiden goddess to Zeus’ wife, and allowed us to get inside her head a bit. With all that Zeus put her through, she’s amazing for sticking with him! I also liked that we basically got the story of Heracles as well (Heracles means “the glory of Hera”), and the small glimpse of Jason. Jason’s line about Hera moving in mysterious ways and basically accounting for Heracles’ fame was perfectly spot-on!

There was also one fairly poignant line at the end: “There is a story they tell of Hera … It is a story that the women knew, for when the men of ancient Greece wrote down their stories, they did not think to ask the women for theirs.” (pg. 65) And isn’t that the truth with all myths? Makes you wonder about everything that was possibly left out. 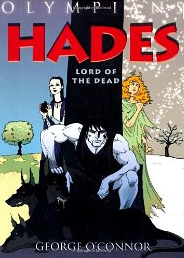 Hades: Lord of the Dead (Olympians #4)

Hades: Lord of the Dead is undoubtedly the best of the Olympians series. I love how, instead of leaping around from myth to myth and story to story, O’Connor chose the story of Persephone to introduce us to Hades and his underground realm. This most likely has something to do with the fact that the story of Persephone and Hades is my favorite Greek myth, but also had something to do with the fact that it was the most cohesive story; the narrative flowed nicely and didn’t confuse anyone by jumping around and introducing new characters or stories. I also love the twist O’Connor provided with the story of Persephone; I don’t want to spoil anyone, but let’s just say that her relationship with Hades was a bit more kosher than some versions of the tale that I’ve read!

Short, succinct and to the point! A great introduction to how Poseidon, Hades and Zeus determined who would rule what. O’Connor also gave us quite a bit of background into Poseidon’s character, and some of his more famous children (and I concur: Theseus WAS a jerk!). As a heads-up, there is a bit of gore, and some stylized nudity that is hidden fairly well in the illustrations. There’s also some sexual content, but all you see in the pictures is some kissing, and considering we’re talking about the Greek gods, said content should be expected. I want to read the first four books in this series before officially deciding, but I’m fairly certain I’ll be adding it to my to-purchase list for my school library.

An e-galley of Poseidon was provided by the publisher via NetGalley in exchange for an honest review. The rest of the titles were borrowed from my local library.

This entry was posted in Reviews and tagged book review, mythology, netgalley arc. Bookmark the permalink.

4 Responses to REVIEW: The Olympians Series by George O’Connor