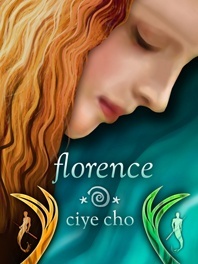 Seventeen-year-old Florence Waverley is out of her depth. Literally. Kidnapped and taken below the waves to the mer world of Niemela, she is the ultimate gift for merman Prince Kiren: a human familiar tied to his side. But nothing is what it seems amid the beauty and danger of a dark ocean.

Every Niemelan has a role to play, from the mermaids who weave towers out of kelp to the warriors who fight sea monsters. But in trying to survive, Florence will end up in the middle of a war between the mer and the Darkness. A conflict that will push her between two brothers: Kiren, the charmer inexplicably drawn to both her and the monsters; and Rolan, the loner who has been pushing her away since the day they met. But in order to take a stand–and find out where she belongs–Florence will have to risk it all: her life, her heart… and her very soul.

When I was contacted by Mr. Cho to possibly review Florence, the magic word that caught my attention was “mermaid”. I am a huge sucker for mermaid books, but have yet to read one that I really enjoyed. Normally there are so many problematic elements in the story that my general feeling upon finishing is “meh”. But that was not the case with Florence; while it took me a bit of time to get invested in the story, once that happened I was happily engrossed in the world of Niemala and the on-going relationships between the characters. And the ending of this book just left me with one thought: “I can’t wait to see what happens next!”

Florence is your typical shy loner girl. She doesn’t have any friends, she hangs by herself, and prefers to observe others through the lens of her camera. When she’s kidnapped by a merman and taken to the underwater world of Niemala, she finds herself instantly immersed in a world completely different from the one she’s used to. Aside from the obvious differences – the world is populated by mermaids and merman, and is obviously underwater – she suddenly finds herself as a focus of others, and has to deal with being thrust into the spotlight. Much of the first part of the book – and the reason it took some time to really grab me – is that the author includes a lot of description and information to help with the world-building. This information, while necessary to help the reader become immersed in the world, really slowed down the development of the plot, which really didn’t appear until about 45% into the story. However, I enjoyed all of the descriptions and details; while it slowed things down, it also really helped me see the world the author had created.

Things I didn’t like as well included: some of the author’s choice of words (I felt like they were too complex or unique for the rest of the narrative; it’s fine to throw in different words so things don’t sound the same, but words that might make people reach for dictionaries – particularly if they’re not so good at using context clues – can really throw people out of the book), and the way the book switched from Florence’s first-person point of view (which is the main point of view) to an omniscient third-person point of view. This allowed the reader to be privy to things that Florence herself was not, and that tends to annoy me, because I like to be on the same page as the narrator. The switching between points of view didn’t necessarily happen as seamlessly as they could have, either, and while these chapters did help progress the plot along, I kind of felt like there could have been some other way to maintain the one single point of view.

I was concerned that we were heading toward a love triangle, and as anyone who has followed my reviews to any degree knows, I am so over love triangles. But this wasn’t your typical one, at least not for me, because one brother was all flash and beauty while the other was more intricate and intriguing; I pretty much had my preferred ship from the get-go, so enjoyed watching Florence figure things out. I also adored Yolee, the princes’ younger sister. Her personality was pretty awesome and I loved what her gift was, and the reason why she loved what she did. And watching Florence and Yolee’s friendship blossom was also fun to read. And I also loved watching the growing relationship between her and Rolan as well. Talk about a guy with some hidden depths!

This book pretty clearly sets itself up for a sequel, at least in my opinion, because there’s no clear wrap-up of the dangers facing the world, and there’s a definite unanswered issue at the end as well. This is okay, though, because I definitely wouldn’t mind diving back into the world of Niemala (yes, the pun was intended; sorry about that). While there were times when the plot was a bit slow, anyone who loves world-building and fun twists on mermaid lore will probably find something to enjoy about this book. You can probably also appreciate the journey of a young woman searching for her place in the world and finally realizing that she can do more than what she thought she could. I know that, for me at least, that was one of the definite plusses!

A copy of this book was provided by the author in exchange for an honest review.

This entry was posted in Reviews and tagged book review, from author, mermaids, review copy wipeout. Bookmark the permalink.