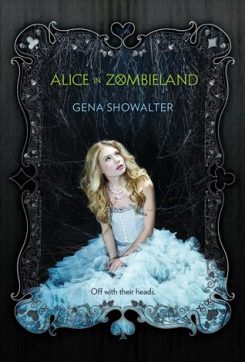 She won’t rest until she’s sent every walking corpse back to its grave. Forever.

Had anyone told Alice Bell that her entire life would change course between one heartbeat and the next, she would have laughed. From blissful to tragic, innocent to ruined? Please. But that’s all it took. One heartbeat. A blink, a breath, a second, and everything she knew and loved was gone.

Her father was right. The monsters are real….

To avenge her family, Ali must learn to fight the undead. To survive, she must learn to trust the baddest of the bad boys, Cole Holland. But Cole has secrets of his own, and if Ali isn’t careful, those secrets might just prove to be more dangerous than the zombies….

I am the first one to admit that zombies aren’t usually my cup of tea. And yet, I was intrigued by this book, not only because it seemed to be a retelling of Alice in Wonderland, but also because I was drawn to the story of the main character. Alice is a girl who loses everything she loves and seems to come out stronger because of the tragedy. Plus, okay, I may or may not have a thing for bad boys, and Cole seems to be a perfect specimen. And then I started seeing very mixed reviews, some from people who loved this book, and others from those who … really didn’t. Their main complaint was that this didn’t seem like a retelling at all, which seemed like a good thing for me to keep in mind as I finally – FINALLY – found the time to read this (I am sure my library will be happy to get it back! I’ve pretty much maxed out my renewals on it, oops). And those people are totally right, because as a retelling, this book fails spectacularly. But there is a plethora of other things that made this book a success for me personally, and in the end I can’t be happier that I decided to go ahead and read it.

For a book dealing with zombies – and let’s not beat around the bush here, there are definitely plenty of zombies – this book had a surprisingly light-hearted and humorous feel to it. I couldn’t help but love Alice, or rather, Ali, as she comes to be known. While she is clearly dealing with the aftermath of the accident that kills her family – and this was done in a very understated, beautiful way – she is still a girl who is full of spunk and sass. Combine her with the absolutely spectacular best friend that is Kat (even more spunk and sass!), and the rather smoldering, ridiculously hot “bad boy” Cole, and you have a cast that drew me in and kept me fully immersed in the story. Plus this book gets major bonus points for Ali’s hilariously funny grandparents, who are trying so hard to speak to her in “her” language and make for some of the funniest lines in the entire book. In fact, for me, this book had a very similar feel to Croak by Gina Damico, which was one of my favorite reads of 2012. Both deal with very serious subject matter, but it’s done in a way that you don’t become overwhelmed by the darkness that exists in the background. But at the same time, if you want darkness without anything light (think This Is Not A Test), then this probably won’t be the book for you, so your mileage may vary!

I also very much appreciated the different sort of zombie mythology (for lack of a better word) used in this book. These zombies aren’t the ones you’re used to seeing, and the ways that they’re dealt with are quite brutal. There is a lot of time spent on Ali training to fight them, and she doesn’t exactly shy away from rather graphic descriptions of what Ali and the others face when they go up against them. These sections are definitely the darkest parts of the book, and the sections that true zombie fans will most likely enjoy the most. As someone who is not a zombie fan (see my statement in the first paragraph), I liked that, while these sections definitely played a part in the overall arch of the story, there were plenty of other things to keep me entertained and help lighten the book’s atmosphere. I am talking specifically about the back-and-forth romance between Ali and Cole, which is full of snark, humor, a bad boy who really isn’t bad and a girl who knows exactly how to annoy him, and some rather, um, HOT makeout scenes. Let me just say that the romance fan in me definitely loved those makeout scenes!

My one piece of advice to anyone thinking about reading this book is to completely disregard the title (Alice in Wonderland this is not, except perhaps in some very cursory ways), and ditch your expectations at the door. I think I enjoyed this book precisely because I did just that, and I am definitely looking forward to book two. If you’re okay with zombies, have an affinity for snarky main characters, and love swoon-worthy romance, then I’d definitely recommend this one!

This entry was posted in Reviews and tagged book review, zombies. Bookmark the permalink.

3 Responses to REVIEW: Alice in Zombieland by Gena Showalter