This week’s Waiting on Wednesday post is for Ink (The Paper Gods #1) by Amanda Sun (Harlequin Teen): 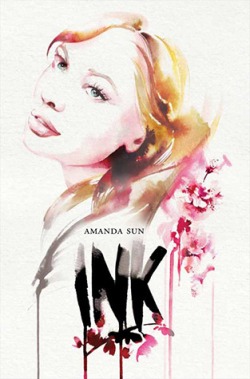 I looked down at the paper, still touching the tip of my shoe. I reached for it, flipping the page over to look.

Scrawls of ink outlined a drawing of a girl lying on a bench.

A sick feeling started to twist in my stomach, like motion sickness.

And then the girl in the drawing turned her head, and her inky eyes glared straight into mine.

On the heels of a family tragedy, the last thing Katie Greene wants to do is move halfway across the world. Stuck with her aunt in Shizuoka, Japan, Katie feels lost. Alone. She doesn’t know the language, she can barely hold a pair of chopsticks, and she can’t seem to get the hang of taking her shoes off whenever she enters a building.

Then there’s gorgeous but aloof Tomohiro, star of the school’s kendo team. How did he really get the scar on his arm? Katie isn’t prepared for the answer. But when she sees the things he draws start moving, there’s no denying the truth: Tomo has a connection to the ancient gods of Japan, and being near Katie is causing his abilities to spiral out of control. If the wrong people notice, they’ll both be targets.

Katie never wanted to move to Japan—now she may not make it out of the country alive.

Okay, I’m going to admit it: the words “connection to the ancient gods of Japan” caught my attention first! I know, I know, I wax on poetically about books dealing with mythology, so anyone who visits this blog at all has probably cottoned on to my love of anything dealing with this type of story. However, this book deals with a mythology I am not at all well-versed in – like, at ALL – which makes this extra interesting for me personally. Plus, how awesome is it that he has the ability to bring his drawings to life? I can’t help but be intrigued by the concept, and what exactly the danger is that’s going to “notice” and put them in harms way. And that cover doesn’t hurt, either!

What are you waiting on this Wednesday? Please link me!

This entry was posted in Waiting on Wednesday and tagged mythology, waiting on wednesday. Bookmark the permalink.

5 Responses to Waiting on Wednesday #26