Today I’m excited to be a part of two different cover reveals! First up is Dangerous by Suzannah Daniels, sponsored by Xpresso Book Tours.

Stone Hamilton had never known fear…until the accident.  Since then, his life has spiraled out of control.  He’s been kicked out of private school, deemed a disappointment by his father, and forced to endure his own guilt, anger, and grief.  The last thing he wants is a relationship with someone who will have expectations of him.  But once he’s enticed by the shimmering pink lips of the oh-so-popular, academically-excelling, straitlaced hottie from his new school, he knows he’s in trouble.

Seventeen-year-old Dara Golding has one goal for the summer.  Make enough money to buy a car, so that she can drive to school her senior year.  After starting a new job, she realizes that she’ll be working with the brooding, motorcycle-riding, bad boy who started attending Quail Mountain High last year.  With his less than stellar reputation, he’s everything she’s afraid of…and that makes him dangerous.

Their undeniable attraction has Stone struggling with his inner demons.  As Dara slowly allows Stone to claim her heart, a little white lie to cover an ugly truth could determine whether she’s his savior or the final straw that will break his sanity.

Suzannah Daniels has had an affinity for words for as long as she can remember. She grew up in North Georgia with four brothers, so she learned at an early age to admire snakes and motorcycles.  When she wasn’t pestering her brothers, she could usually be found reading or writing.

She is the author of Viking’s Embrace, a historical romance, and Ghostly Encounter, Book One of her Ghostly series (young adult paranormal romance).

Currently, she lives in Chattanooga, Tennessee with her husband and her teenage daughter. Her son lives nearby. The family pets include a Lab mix, a Basset Hound, a Shih Tzu, and a sweet, little kitty.

Next up is the Cover Reveal for The Obvious Game by Rita Arens, sponsored by Inkspell Publishing! This one comes with a giveaway, so don’t forget to enter! 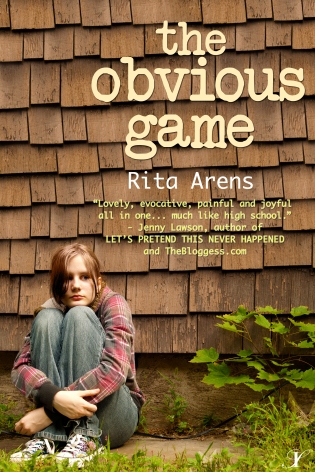 “Everyone trusted me back then. Good old, dependable Diana. Which is why most people didn’t notice at first.”

“Your shirt is yellow.”

“Your eyes are blue.”

“You have to stop running away from your problems.”

Fifteen-year-old Diana Keller accidentally begins teaching The Obvious Game to new kid Jesse on his sixteenth birthday. As their relationship deepens, Diana avoids Jesse’s past with her own secrets — which she’ll protect at any cost.

Pre-order now at Inkspell Publishing Website at a special discount of 30% on both paperback and ebook!

Praise for The Obvious Game:

“I couldn’t put down The Obvious Game. Arens perfectly captures the hunger, pain and uncertainty of adolescence.” — Ann Napolitano, author of A GOOD HARD LOOK and WITHIN ARM’S REACH

“THE OBVIOUS GAME is a fearless, honest, and intense look into the psychology of anorexia. The characters—especially Diana–are so natural and emotionally authentic that you’ll find yourself yelling at the page even as you’re compelled to turn it.” — Coert Voorhees, author of LUCKY FOOLS and THE BROTHERS TORRES

“Let’s be clear about one thing: there’s nothing obvious about The Obvious Game. Arens has written a moving, sometimes heart-breaking story about one girl’s attempt to control the uncontrollable. You can’t help but relate to Diana and her struggles as you delve into this gem of a novel.” — Risa Green, author of THE SECRET SOCIETY OF THE PINK CRYSTAL BALL

Rita Arens is the author of The Obvious Game and the editor of the award-winning parenting anthology Sleep Is for the Weak. She writes the popular blog Surrender, Dorothy and lives in Kansas City with her husband and daughter. The Obvious Game is her first young adult novel. She is at work on a second.

There is a giveaway to go along with the Cover Reveal for The Obvious Game! Please go HERE to enter for your chance to win one paperback copy of the book OR two e-book copies! Giveaway is open only to folks from the US, UK and Canada. Good luck!