This week’s Waiting on Wednesday post is for The Eternity Cure (Blood of Eden #2) by Julie Kagawa (Harlequin Teen): 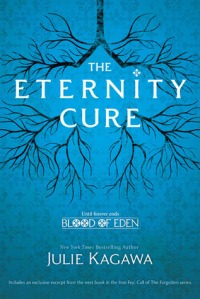 Allison Sekemoto has vowed to rescue her creator, Kanin, who is being held hostage and tortured by the psychotic vampire Sarren. The call of blood leads her back to the beginning—New Covington and the Fringe, and a vampire prince who wants her dead yet may become her wary ally.

Even as Allie faces shocking revelations and heartbreak like she’s never known, a new strain of the Red Lung virus that decimated humanity is rising to threaten human and vampire alike.

That’s easy! I really liked the first one. Having never read a book by Julie Kagawa – although her Iron Fey series is on my to-read list and I hope to get to it … eventually – I wasn’t sure what to expect. Add to that the fact that I’m sort of over vampires as a whole, and I didn’t have very high expectations going in. But I was very pleasantly surprised. In Allison I found a very awesome, rather kick-ass girl who deals with her situation the best she can. The main draw for me with the second book, though, is the promise of more Kanin; I really really liked Kanin!

What are you waiting on this Wednesday? Please link me!

This entry was posted in Waiting on Wednesday and tagged sequel, vampires, waiting on wednesday. Bookmark the permalink.

19 Responses to Waiting on Wednesday #31