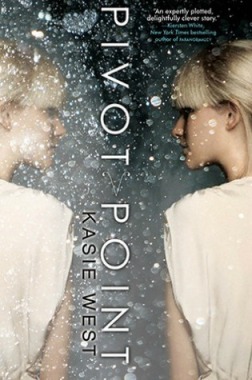 Addison Coleman’s life is one big “What if?” As a Searcher, whenever Addie is faced with a choice, she can look into the future and see both outcomes. It’s the ultimate insurance plan against disaster. Or so she thought. When Addie’s parents ambush her with the news of their divorce, she has to pick who she wants to live with—her father, who is leaving the paranormal compound to live among the “Norms,” or her mother, who is staying in the life Addie has always known. Addie loves her life just as it is, so her answer should be easy. One Search six weeks into the future proves it’s not.

In one potential future, Addie is adjusting to life outside the Compound as the new girl in a Norm high school where she meets Trevor, a cute, sensitive artist who understands her. In the other path, Addie is being pursued by the hottest guy in school—but she never wanted to be a quarterback’s girlfriend. When Addie’s father is asked to consult on a murder in the Compound, she’s unwittingly drawn into a dangerous game that threatens everything she holds dear. With love and loss in both lives, it all comes down to which reality she’s willing to live through . . . and who she can’t live without.

Going in to Pivot Point, I really wasn’t sure what to expect. The book sounded so very different from what I normally read – a girl who can see her future based on a single choice – and I just didn’t know how well I’d like a book made up of two potential what-ifs instead of a book where things are actually happening. However, I need not have worried, because this book turned out to be really really good.

Addie has a special ability called Divergence, which allows her what’s going to happen when she makes a particular choice. The book is made up of those two choices, so while the reader gets to experience her two lives through her Searching, the real Addie spends most of this book lying on her bed while her friend, Laila, watches over her. Of course, this was easy enough to forget, because both of Addie’s potential futures are equally compelling, although I personally enjoyed her living in the Norm world more (thanks mostly to the character of Trevor, who I couldn’t help but love immensely). I do want to point out that the book can be confusing, but the author made it easier to follow by giving hints in the chapter titles. Each chapter starts with a definition of a word that either has “para” or “norm” in it, which helps keep the reader on track.

I really enjoyed Addie in both of her potential futures. I loved how she slowly integrated herself into the “Norm” world and I loved her interactions with Trevor, as they moved from potential best friends to something more. I love that he was a bit nerdy with his comic book drawings, but also quiet and sensitive and sweet. He was such a huge contrast to Addie’s love interest in her other future, Duke. Whereas Trevor was unassuming but still tough and popular, Duke was over the top and in your face with his brashness and arrogance. While there were times that I enjoyed his and Addie’s banter, on the whole he just really paled in comparison to Trevor. Obviously this definitely swayed my opinion of which choice I thought Addie should make, at least until the plot twist showed up.

What I really wish we’d had more of was the background for the Para world. I wanted to know how these abilities came to be, how the city they live in was created, etc. This is the main reason I didn’t give this the full five stars. It’s still a phenomenal book, but I was just left with too many questions (not least of which is what’s going to happen next; can I have the as-yet-untitled book two now, please?). Maybe book two will go more in depth with the world building?

All in all, Pivot Point is a really solid debut. I enjoyed every second of it, and found it intriguing and compelling in equal measures. I loved the cast of characters, the diverse worlds, and the fact that we essentially got to experience two books in one. While I did notice a few nitpicky things that made it impossible for me to give this the highest possible rating, I can still wholeheartedly recommend this to everyone!

An ARC was received via Debut Author Challenge ARC Tours in exchange for an honest review.