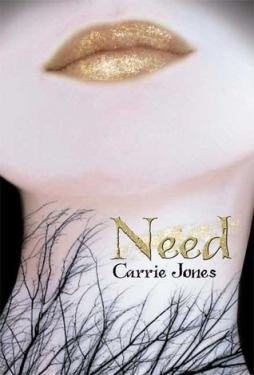 Zara White suspects there’s a freaky guy semi-stalking her. She’s also obsessed with phobias. And it’s true, she hasn’t exactly been herself since her stepfather died. But exiling her to shivery Maine to live with her grandmother? That seems a bit extreme. The move is supposed to help her stay sane…but Zara’s pretty sure her mom just can’t deal with her right now.

She couldn’t be more wrong. Turns out the semi-stalker is not a figment of Zara’s overactive imagination. In fact, he’s still following her, leaving behind an eerie trail of gold dust. There’s something not right – not human – in this sleepy Maine town, and all signs point to Zara.

In this creepy, compelling breakout novel, Carrie Jones delivers romance, suspense, and a creature you never thought you’d have to fear.

Need had been on my radar for quite some time. I am especially fond of faerie books, so was drawn to this one due to the inclusion of the fae in the plot. However, this didn’t have your typical faeries; the creatures in this book were pixies, and not the type that Gilderoy Lockhart released in Chamber of Secrets. I likewise wasn’t expecting the inclusion of shapeshifters, so was quite surprised with the twists of the plot. The sleepy Maine town that our main character, Zara, finds herself inhabiting certainly had a lot going on!

When push comes to shove, I can honestly say that I “liked” this book. However, there were a lot of things that I had issues with, most notably the pacing and plot advancement. I also have a problem when nearly everyone in a book turns out to have some sort of special power or ability, and couldn’t help but feel like that was the case here. Now, on the one hand, I appreciate a book that can keep me guessing, and Need certainly did that. But I want things to make sense, too, and felt like there was just a whole lot of paranormal activity going on in this book when there didn’t really need to be. The book is also quite clearly the author’s first. I was struck by the word usage in several instances, most notably when the door and Nick both “smashed” into something in the same sentence. I always try to alter my word choice to create some variety in my reviews, so get annoyed when authors don’t take the same amount of time in their books. Obviously, this is just a matter of personal taste, though, so you may not have the same problem.

I did like the way the romance built between Nick and Zara, though, so give the author kudos for that. While Zara notices his good looks early on, they didn’t just become instantly enamored with each other. There was a nice set-up to their relationship, and it wasn’t completely easy for them, either. In fact, it’s the romance that piqued my interest the most and made me want to check out the second book. I wonder how the plot will advance when the two characters are already together.

There were some nice plot twists in regard to the pixies, and I am likewise intrigued with what’s going to happen next with them. I was surprised at how bloodthirsty and dangerous these beings were, especially since my only experience with pixies was in Harry Potter, when they were decidedly smaller and not nearly as deadly. I liked that Ms. Jones sort of flipped your preconceived notions of pixies on their head. There was enough of an open ending to nicely set up the second book, and I can’t wait to see the fallout of Zara’s decision.

All in all, Need was disappointing to me personally, but I see enough promise there to ensure that I’ll check out the second book, Captivate. If you’re a fan of faeries, take note that this book isn’t going to be what you expected. Fans of paranormal creatures, though, will have plenty to make them happy.