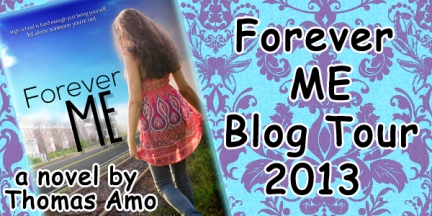 Today I’m happy to host a spot on the Blog Tour for Forever ME by Thomas Amo. Below you can find the book’s synopsis, and an excerpt from the book. Thank you to Mr. Amo for reaching out to Read and Reviewed to help in the promotion of his book! 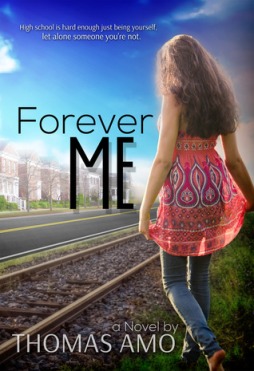 Hannah Richards isn’t your typical 16 year-old at Wichita Falls High. Fashions, trends, cosmetics and style are unimportant to her. An avid reader, guitar player, classic movie and television buff, Hannah marches to the beat of her own drum. Visible only to her Father the town Sheriff, and her two best friends. Hannah lives a simple, un-pampered life as an “Eastie.”

After coming to the aide of Taylor Monroe, a popular member of the ultra snobby “Stilettos” at school, Hannah’s life beings spiraling out of control. As she starts spending more time with Taylor, her best friends abandon her, after a series of misunderstandings, causing Hannah to re-invent herself.

Hannah quickly gets caught up in a life much different than the one she knows, where status, glamour, makeup, appearance and acceptance become her masters. And what of the dark secret that haunts the streets of Wichita Falls?

Can Hannah survive the lies, deceit, jealousy and rage that are now waiting for her behind every corner? Will she succumb to the pressures of popularity? Or will she be crushed under the heels of the “Stilettos”?

~High school is hard enough just being yourself, let alone being someone you’re not~

The alarm buzzed and Hannah rolled over on her back in bed and stretched. She tried to get her eyes to focus on her cell phone to see what time it was. The digital numbers told her it was 4:15 a.m. She stopped the noise and reached an arm behind her to shake Taylor awake, but the bed was empty. Surprised, she rolled over and found she had the bed all to herself.  She hoped she hadn’t forced Taylor out. She had been known to be a bed hog, especially with the covers. She propped herself up on her elbows when the bedroom light flipped on. Like a vampire recoiling from the sunlight, Hannah’s hand quickly went to shield her eyes.

Hannah slowly lowered her hand and saw Taylor standing in the doorway, still wearing her father’s t-shirt but with a gator clip in her hair to hold it up.

“I thought I set my alarm for six.”

“You did, but I changed it. Hot Girl Rule Number 1: Rise early and get your face on. Only homely girls sleep in.”

Hannah let her head fall back on the pillow. “Ohhhh, let me be homely, just for an another hour.”

“Oh no you don’t,” called Taylor as she reached under the blanket, grabbed Hannah by the wrist and tugged her up into a sitting position. “Let’s get those feet on the floor, I already picked out your outfit, got the flatiron hot and made coffee.”

“I swear, if I didn’t love men, I’d probably marry you, just for the fact you made me coffee,” Hannah said rubbing her face trying to wake up.

“Yeah, don’t get ahead of yourself there, doll. You’re pretty cute, but not my type. By the way I made the coffee for me. I’m just sharing it with you. Now let’s get going, the sun will be showing up in an hour,” Taylor teased.

“Okay, Sarge,” Hannah said with a half salute. Her feet touched the floor and she recoiled. She started to climb back under the covers but then saw the look on Taylor’s face. “Okay, okay.” Hannah stood up and winced once more from the cold floor on her feet. She stumbled from her bedroom to the bathroom across the hall. Taylor had everything laid out like a display in a showroom. She was truly organized when it came to preparing for the day. Hannah examined her face in the mirror. She was prepared for the worst. She was afraid she was going to wear the after effects of Lauren’s punches for the next week, but surprisingly, there was only a small amount of bruising on the corner of her chin and up next to her right eye. Even the swelling in her lip had pretty much disappeared.

Taylor returned to the bathroom with a cup of coffee for Hannah. Hannah turned and took the cup with a grateful expression. She took a sip and instantly felt the perfectly made drink intoxicate all of her senses. She sat the cup on the vanity and wrapped her arms around Taylor and hugged her. “I love you,” she whispered.

Taylor stood being a prisoner of Hannah’s clinch. Her eyes darted from side to side. Her expression of feeling awkward reflected in the mirror. “Um—love you too, but it’s just coffee, Hannah.”

Hannah shook her head. “No, that is a cup filled with love,” she said with sleep-crusted eyes.

“I just need a moment,” Hannah teased as she hugged her once more. Taylor gave the patented pity hand pat on Hannah’s back that meant, Okay, I love you too but I’m beyond comfortable now.

“How did you sleep?” Hannah asked as she took a healthy drink of coffee.

Taylor took Hannah’s hair into her hands and ran the flatiron across it. “Pretty good, but you are a cover hog.”

“I know, but in my defense you’re the first person I’ve ever slept with.”

Thomas Amo has been writing since he was a boy. His dream was always to write for the movies, television, theatre. In the late 1990’s he began a career as a full time theatrical producer and while running his own theatre company began writing plays for the stage. In 2000 his first novel was published. It would be another decade before he published again. In August of 2012 he finished epic YA novel, “Forever Me.”

This entry was posted in Blog Tour and tagged blog tour, contemporary. Bookmark the permalink.

1 Response to EXCERPT POST: Forever ME by Thomas Amo