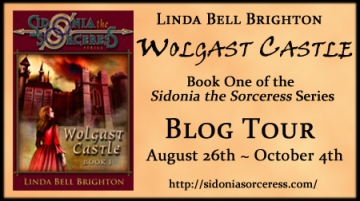 Today I’m excited to host a stop on the Blog Tour for Wolgast Castle by Linda Bell Brighton. I really love historical paranormal reads, and this one sounds very interesting. Below is a guest post by author Linda Bell Brighton about the Holy Roman Empire and Ottoman Empire, as well as links to a couple of giveaways, including a Grand Prize Pack celebrating the book’s release. 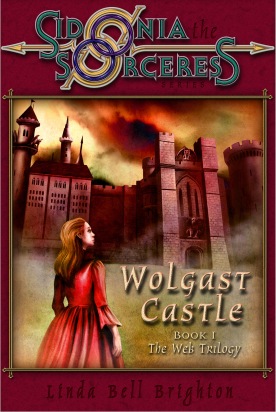 What if witches really existed during the Burning Times?

Forced to attend the Regent’s celebration at Wolgast Castle, 1560 Germany, Sidonia von Bork, fears her magical abilities will be discovered and she’ll be burned alive as a witch. When she discovers she is actually a member of an ancient shape-shifting race and the prophesied Golden One, she must face her destiny: to save the multiverse from the daemons determined to destroy all humans, and stay alive in the process.

That could have been the headline in 1560.

A guy named Turgut Reis had captured Tripoli (part of Libya) from the Maltese Knights (aka Knights Hospitaller) in August 1551. The Sultan at the time, Suleiman the Magnificent (and he was!), made him Governor. Turgut made himself Master by enslaving most of the population. By 1558, Turgut was raiding the Mediterranean coasts of Spain.

Most of Europe was getting worried. Who could blame them? For over 160 years the Turks had been a real life Pacman, gobbling up Europe! First Serbia, then Bulgaria. Followed by Constantinople, the Byzantine Empire, Bosnia, Crimea, Albania, and even the southeast corner of Italy. And plenty more places.

You’d think in 1529, Europe would be worried when the Magnificent himself led a siege on Vienna (the first one.) But, no! Bickering and eons-long rivalry among the European nations prevented them coming together for mutual aid.

The only reason some of them eventually joined forces was because King Philip II of Spain (the guy who later attacked England) pleaded to Pope Paul IV (the one instrumental in setting up the Roman Inquisition.) Even though Paul didn’t like anything Spanish, he despised anything non-Christian.

So Christians go sailing off to Tripoli. How many ships and what sizes are argued by historians then and now. But it was a bunch. And a bunch of soldiers. Except, they didn’t take enough water and they got sick. Oh yea, a storm threw them off course, too. So they landed on an island called Djerba. And they overran it, the largest island off North Africa.

Communication was slow, but as soon as they heard, the Turks launched a fleet twice the size of Christians. The sea battle didn’t take long, a few hours. But it took a three month siege on the island garrison before the Turks were able to take about 5,000 prisoners back to Istanbul.

And the Turks kept a coming.

Until they met humble and just Max (yep, the one mentioned in Wolgast Castle who becomes Holy Roman Emperor Maximillian II.) Max, a Habsburg, had been schooled in warfare. And its horrors made him offer the Magnificent One to continue to pay the tribute which they had exacted of Max’s father. But Suleiman was even more magnificent now having won several other wars and campaigns. The Pacman was ready to eat Europe entirely. On a day with beautiful spring weather and the swelling buds decorating fields with loveliness, the Turks attacked what remained of Poland. How Max stopped the Turks takes a novel (and probably several short stories) to do the justice it deserves. (They are in the planning stages as part of the Sidonia the Sorceress series.)

That battle may have “saved civilization” as one person claimed, but it didn’t end the Ottoman-Holy Roman Empire hostilities that had started when Ottoman’s raided Transylvania for the first time in 1394.

The French Revolution and then the Napoleonic Era became giant Pacmans. Part of the territory that was never Holy, never Roman, and never truly an Empire had its land annexed and redistributed. On August 6, 1806, when the last Holy Roman Emperor Francis II abdicated following a military defeat by the French under Napoleon, the Empire was formally dissolved. But the Habsburgs of Austria lived on.

The spread of revolts inside Ottoman Empire was its fatal disease. The Turkish national movement won the Turkish War of Independence. The sultanate was abolished on 1 November 1922. And in 1923, the six-century-old Empire was replaced by the modern Republic of Turkey.

Linda is giving away prizes, including an e-copy of her book at each blog stop on her tour AND three Grand Prize Giveaways of one Travel Mug, one T-Shirt and one Custom Jumbo Tote Bag with your choice of fan art, chosen from HERE, shipped to anywhere in the world!

1) To win a book: Leave a comment on this blog post on what is your favorite part of history to be entered to win a book. Be sure to leave your email address in the comments so we can contact you if you’re the lucky winner. This giveaway ends on Sunday, 9/22.

2) To win the Travel Mug or the T-Shirt or the Custom Jumbo Tote Bag with Linda’s fan art of your choice, click the link to go to Linda’s website HERE and enter the Rafflecopter at the bottom of the page. The three lucky winners will be selected by October 7, 2013.  Good luck to those of you who enter!

Linda Bell Brighton fell in love with myths, magic, and monsters at an early age. On a thunder-storming day in the Keys, her father—in his bass reading voice—brought The Hound of the Baskerville to too-vivid-life. From that day forward, Greek and Roman myths merged with Wonder Woman and Super girl. After studying medieval and Renaissance literature in college, she now combines her loves by writing an alternate history of the Witch Burning Times that she calls magpunk: real history with myths, magic, monsters—and daemons, too.

This entry was posted in Blog Tour and tagged blog tour. Bookmark the permalink.