This week I’m Waiting on Wednesday for Cress (Lunar Chronicles #3) by Marissa Meyer (Feiwel and Friends): 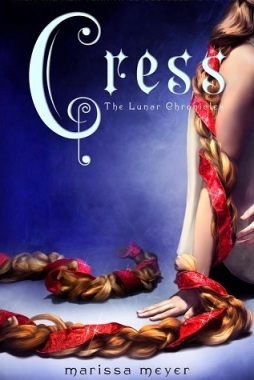 Rapunzel’s tower is a satellite. She can’t let down her hair – or her guard.

In this third book in the bestselling Lunar Chronicles series, Cinder and Captain Thorne are fugitives on the run, with Scarlet and Wolf in tow. Together, they’re plotting to overthrow Queen Levana and her army.

Their best hope lies with Cress, who has been trapped on a satellite since childhood with only her netscreens as company. All that screen time has made Cress an excellent hacker – unfortunately, she’s just received orders from Levana to track down Cinder and her handsome accomplice.

When a daring rescue goes awry, the group is separated. Cress finally has her freedom, but it comes at a high price. Meanwhile, Queen Levana will let nothing stop her marriage to Emperor Kai. Cress, Scarlet, and Cinder may not have signed up to save the world, but they may be the only ones who can.

I adored Cinder and really liked Scarlet, so of course I am eagerly awaiting the release of Cress. I love the way the fairy tales have been twisted around in sometimes small and sometimes large ways, and can’t wait to see what comes next. Plus, I heard from Brittany @ The Book Addict’s Guide that Thorne is fabulous in Cress, which I can’t wait to read since he was one of my favorite characters in Scarlet. It’s going to be a long wait until February!

This entry was posted in Waiting on Wednesday and tagged fairy tales, sequel, waiting on wednesday. Bookmark the permalink.

7 Responses to Waiting on Wednesday #67