Today I’m hosting a stop on the Blog Tour for Daughter of Isis by Kelsey Ketch, sponsored by YA Bound Book Tours. I adore anything dealing with mythology, and have been trying to find more books that include Egyptian Mythology specifically, so jumped at the chance to read this one. Make sure you check out all the other stops on this tour! You can access the list of tour stops by clicking the banner above. 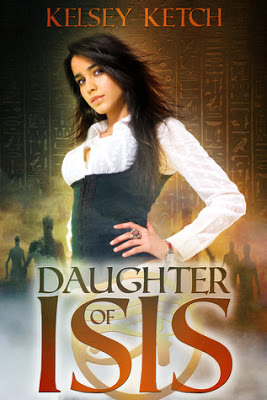 “Her mouth parted slightly, waiting for Seth to breathe life into her own body, just like in the story. She wanted him to awaken her senses.”

The last thing Natara “Natti” Stone wants to do is to start anew at Setemple High School. She wished she had never left London. Yet the brutal murder of her maternal grandmother has made her life very complicated. The only clue related to her murder is an ancient, encrypted necklace Natti discovered after her grandmother’s death. And if trying to adjust to American life is not enough, Natti is being stalked by a mysterious, charming high school senior, Seth O’Keefe, who is annoyingly persistent in his attempts at seduction.

Seth O’Keefe is secretly a member of the Sons of Set, an order that worships the Egyptian god of chaos. Seth’s blessing from Set, his “charm,” never failed, except with one person: Natti Stone. Her ability to elude him infatuates and infuriates him, and he becomes obsessed with the chase. But the closer he gets to her, the more his emotions take a dangerous turn, and he risks breaking one of the most valued covenants of his order. The punishment for which is a fate worse than death.

The adventure this unlikely couple becomes engulfed in could cost them their lives and their souls.

As with pretty much any book that involves mythology, I was instantly intrigued by the synopsis of Daughter of Isis. I’ve actually been looking for more books incorporating Egyptian mythology, because – unlike its Greek counterpart – there really isn’t a plethora of stories out there, which is a shame because the mythology is rich and interesting and really lends itself to a lot of retellings. However, Daughter of Isis left me in an initial conundrum, because I wasn’t sure upon finishing the book how I ultimately felt. There were things I loved about it, and others I wasn’t so keen on. Upon further reflection, I decided that I ultimately liked the book – particularly the use of mythology and our main character, Natti – although I definitely had issues with other portions of the story.

First off, let me start with the good, and that was the way the mythology was incorporated. This wasn’t your typical retelling. There weren’t any actual gods or goddesses present, but instead people who followed the gods/goddesses teachings. I liked the idea of these sort of “secret societies” (for lack of a better term) and the way each was charged with a task of sorts. While the Sons of Set turned my stomach – more on that in a minute – I found it interesting to get a glimpse of their inner workings and what they were doing and their reasoning for doing so. I also liked the pacing of the plot, for the most part, and the way the truth about Natti’s family and Seth and his father were weaved into the story. My only wish is that there was more Isis; she isn’t really present here, and I wish we’d gotten to see more of her. Maybe in book two.

Natti, also, was a fun heroine and one that I liked pretty much immediately. She had a wonderful strength of character, and deals extremely well with what’s thrown at her. I especially liked that, aside from being physically gorgeous, she was really just a typical teenager, albeit with her fair share of unfortunate circumstances. My only complaint about her is that she ignores her uncomfortable feelings regarding Seth. She knows something’s off about him, particularly after their conversation at the cafe, and instead of running the other way, it just seems to pull her more toward him. But then again, I didn’t like Seth or what he’s able to do, so that might just be an issue of personal taste. I did like that she manages to find a group of friends pretty much straight off, and especially liked her friendship with Wanda, who was one of my favorite supporting characters in the book.

And speaking of Seth, oh BOY did I have issues with him. I don’t typically go for the creepy love interest in books, and I’m afraid that Seth – and the other Sons of Set – firmly belong in that category. Seth is able to manipulate people’s feelings, and essentially charm them into doing what he wants. He also is extremely egotistical and honestly not a terribly nice person, so combined with his emotional manipulations, I just really couldn’t get behind him at all. I do want to say that there is some growth and development to him, and he starts to question what he’s always been taught, but for me personally, it just wasn’t enough for me to change my overall opinion of him. I was also horrified by the other Sons and the way they just literally do not seem to care about anyone but themselves. Every time we had a scene from Seth’s point of view, and he was interacting with either his father or any of the other Sons – particularly his two “friends” – I just found it extremely uncomfortable to read. Yes, what they’re doing fits with Set (he is the god of chaos, after all), but they were just such terrible people that I literally cringed throughout most of the descriptions and conversations, particularly their manipulations of women. I also had a hard time suspending my disbelief that they’re able to cover up so many of their actions, considering how many laws they’re breaking and the crimes they are literally constantly committing.

And then there’s the fact that Seth and Natti are supposedly taking American Literature, and yet the big change in Seth’s character revolves around their reading of The Taming of the Shrew, which is written by famous British author William Shakespeare, and wouldn’t actually be on a reading list for an American Lit course. Obviously, this is minor, but it was certainly something that leapt out at me and sort of jolted me out of the story. I also felt like the scenes taking place at Natti and Seth’s school became monotonous over time, particularly their interactions in the hallways and the fact that their conversations tended to revolve around Seth trying to manipulate Natti, Natti getting a headache, and telling him to leave her alone. I would have loved to see a little more variety to their run-ins, or perhaps a few less scenes taking place during school hours.

Even though I had some significant issues with the love interest in this book, I ultimately found enough to balance that out and come away from Daughter of Isis pleased overall that I’d taken the time to read it. I do want to warn that the book ends on a pretty significant cliffhanger, so if you’re not fond of those you may want to wait until book two is released in order to read them both back to back. I didn’t love the ending – particularly the fact that Natti is now even more vulnerable to Seth’s abilities should he choose to use them on her – but did like that the danger is ramped up and the overall plot moving along. I’m intrigued enough that I’ll most likely check out the sequel, just to see what happens next!

A copy of this book was provided for blog tour purposes in exchange for an honest review.

There are 2 different giveaways associated with this Tour! For the international giveaway, please go to Rafflecopter HERE to enter for your chance to win [2] e-book copies of Daughter of Isis + a Swag Pack. For US entrants, click HERE for your chance to win a Natti prize pack, which includes [1] signed paperback copy of Daughter of Isis, a Union Jack journal, grey tabby cat beanbag, Eye of Horus pendant, and swag. Good luck!

During her high school years, Kelsey Ketch could always be found tucked away in a little corner of the hall or classroom, writing her fantasy worlds and creating illustrations and maps. Today is no different, except now she’s writing in the break room at her office building or at the tables of the Barnes and Noble Café in Cary, North Carolina. She is also an avid reader, a part-time book blogger at Ketch’s Book Nook, and lives with her two orange tabbies and awesome and humorous flat-mate.Daughter of Isis is her debut novel.

5 Responses to BLOG TOUR STOP: Review of Daughter of Isis by Kelsey Ketch