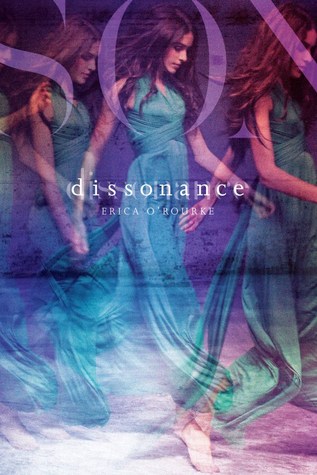 Delancy Sullivan has always known there’s more to reality than what people see. Every time someone makes a choice, a new, parallel world branches off from the existing one. Eating breakfast or skipping it, turning left instead of right, sneaking out instead of staying in bed ~ all of these choices create an alternate universe in which an echo self takes the road not travelled and makes the opposite decision. As a Walker, someone who can navigate between these worlds, Del’s job is to keep all of the dimensions in harmony.

Normally, Del can hear the dissonant frequency that each world emits as clear as a bell. But when a training session in an off-key world goes horribly wrong, she is forbidden from Walking by the Council. But Del’s not big on following the rules and she secretly starts to investigate these other worlds. Something strange is connecting them and it’s not just her random encounters with echo versions of the guy she likes, Simon Lane.

But Del’s decisions have unimaginable consequences and, as she begins to fall for the Echo Simons in each world, she draws closer to a truth that the Council of Walkers is trying to hide ~ a secret that threatens the fate of the entire multiverse.

Dissonance has been on my radar for a really long time, ever since it first popped up on Edelweiss in the spring of 2013. It boasted a synopsis that was new to me – something sci-fi-ish that dealt with the concept of the multiverse – and seemed to have that sort of loner, strong, female lead that I tend to gravitate towards. It took me far longer to get around to actually reading it than it should have – this is a hefty book, sitting at just under 500 pages – but once I did, I literally read it in one go. I found the writing to be extremely solid, with a nice blend of mystery and humor and romance that kept me eagerly flipping through my Kindle until the very end.

The first thing I must talk about in a review for this book is the world-building. Because, let me just say, it is awesome. For all of those paranormal/sci-fi/whatever other genre books you’ve read and then complained about because the world just didn’t make sense, or things weren’t explained? This book is the opposite. The explanation starts pretty much from the get-go, and continues throughout the story. It’s also weaved in seamlessly with the narrative, because Delancey herself is still an “amateur” Walker – she’s not licensed yet, so much of the book focuses on her lessons with her sister, Addison. And while Delancey learns, so, too, does the reader. I loved the way the characters “Walk” to the different worlds – or Echoes – and the ways they’re taught to fix the issues they may find there. And as someone who herself has perfect pitch, I loved the nod to the importance of music and the way people and places have their own tones. Just, seriously, the world-building of this book would have been enough to sell me on it completely, even without the characters themselves.

Speaking of the characters, there’s a lot there to offer as well. Aside from Del, who I actually really felt for throughout the story, particularly all her inner thoughts about how she wasn’t good enough, you also have: Monty, Delancey’s grandfather who’s not quite right; Addison, the over-achieving big sister who doesn’t get along at all with Del (at least not at first); Elliot, the brainy best friend who clearly has feelings for Del that she doesn’t return; and then, of course, Simon, the love interest. I actually found myself really drawn to Addison, and was really excited to hear that there’s going to be a novella released in 2015 that focuses on her, because she gets me all tangled up in my thoughts. I found her desire for perfection to be realistic, and can’t wait to see inside her head. I also really loved the relationship that grows between Simon and Del, because it, too, just felt extremely real and heart-wrenching and true, so, seriously, just mad props all around to Ms. O’Rourke!

All in all, I found Dissonance to be a wonderful breath of fresh air in the YA world. It has a lot going for it – relatable characters, excellent world-building, intrigue and suspense – and a cliffhanger ending. Which, yeah, hurt me, so there’s always that. It’s also a nice little step into the sci-fi end of things, without space or other elements that may put readers off the genre. I definitely recommend it, and personally can’t wait for book two!

An e-galley was provided via Edelweiss by the publisher in exchange for an honest review.

This entry was posted in Reviews and tagged book review, edelweiss arc, sci-fi. Bookmark the permalink.