REVIEW: Flights and Chimes and Mysterious Times by Emma Trevayne 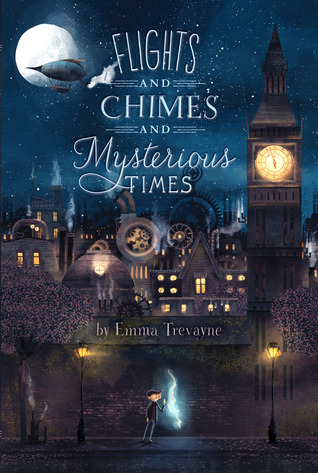 Ten-year-old Jack Foster has stepped through a doorway and into quite a different London.

Londinium is a smoky, dark, and dangerous place, home to mischievous metal fairies and fearsome clockwork dragons that breathe scalding steam. The people wear goggles to protect their eyes, brass grill insets in their nostrils to filter air, or mechanical limbs to replace missing ones.

Over it all rules the Lady, and the Lady has demanded a new son—a perfect flesh-and-blood child. She has chosen Jack.

Jack’s wonder at the magic and steam-powered marvels in Londinium lasts until he learns he is the pawn in a very dangerous game. The consequences are deadly, and his only hope of escape, of returning home, lies with a legendary clockwork bird.

The Gearwing grants wishes—or it did, before it was broken—before it was killed. But some things don’t stay dead forever.

I am the first to admit that I haven’t read much of anything that could be classified as steampunk. So when Flights and Chimes and Mysterious Times popped up on my radar – not only a cool-sounding middle grade book but one that incorporated steampunk elements into it – it immediately went on to my to-read list. And for the most part, I did enjoy this book; it has a rather likable main character and was set in a very unique world. But there was just something about it that failed to fully pull me into the story, which in turn meant that I wasn’t completely enamored with it, which lead directly to the amount of time it took me to read it. Maybe it’s the fact that I still had questions upon finishing it that left me rather unsatisfied, or maybe it’s because, while the book had action in it, there wasn’t enough? Maybe it’s because that unique world that Jack finds himself in wasn’t completely fleshed out? I dunno. I just wasn’t as in love with it as I wanted to be when it was all said and done.

The book starts off in London in an undetermined time period – possibly late 1800s or early 1900s based on the outfits that Jack’s mother is described as wearing – and you’re introduced to two of the main characters right off the bat: Jack. who is returning home for the school holidays, and Lorcan who has some sort of interest in Jack that isn’t fully explained until a bit later. I liked the setting and description of London that the author gave us – the idea of seances and magicians making private house calls – and also the oddity of Lorcan, who the reader knows is off even if they’re not completely sure why. The setting then switches to Londinium, which is a world made up of cogs and wheels and clockwork. Again, the descriptions of the world are first-rate – you could see everything Jack sees and the images were extremely strong in my head while I was reading – but it was here that I had most of my issues.

See, when it comes to interesting worlds, I want to know MORE. More details, more history, more … everything. And I really didn’t feel like I got that. We meet the Lady – who rules Londinium – and while some things about her are explained, not all of them are. We get the myth of the Gearwing, which WAS explained fairly fully, but the world of Londinium itself – designed by Lorcan to resemble the real London, but full of clockwork faeries and people with metal hands and feet – wasn’t ever completely fleshed out, or at least not to my satisfaction. Maybe I’m just picky, but I don’t like finishing a book that is seemingly a stand-alone and still having questions about what and where and why. It impacts my feelings upon finishing, and directly impacts my rating. Hence this review and my somewhat jumbled thoughts.

All in all I suppose Flights and Chimes and Mysterious Times is a decent middle-grade book with a nice blend of other worlds and steampunk and myths. I liked Jack, and felt a fondness for Beth, and liked the adventures the two got up to. But I just wasn’t completely happy with what wasn’t answered, and it’s because of this that I ultimately declare this book to just be okay. Take that as you will!

This entry was posted in Reviews and tagged book review, middle grade, steampunk. Bookmark the permalink.

2 Responses to REVIEW: Flights and Chimes and Mysterious Times by Emma Trevayne