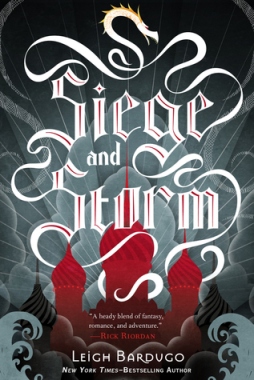 Hunted across the True Sea, haunted by the lives she took on the Fold, Alina must try to make a life with Mal in an unfamiliar land, all while keeping her identity as the Sun Summoner a secret. But she can’t outrun her past or her destiny for long.

The Darkling has emerged from the Shadow Fold with a terrifying new power and a dangerous plan that will test the very boundaries of the natural world. With the help of a notorious privateer, Alina returns to the country she abandoned, determined to fight the forces gathering against Ravka. But as her power grows, Alina slips deeper into the Darkling’s game of forbidden magic, and farther away from Mal. Somehow, she will have to choose between her country, her power, and the love she always thought would guide her–or risk losing everything to the oncoming storm.

Upon completing Siege and Storm, I was left with a pretty serious dilemma: how does one go about reviewing a book that made her feel all the emotions, that she loved from beginning to end, that provided constant twists and turns so that the reader hardly knows what’s up? That’s the situation I’m currently facing, as I stare at the blinking cursor in my update box. How can I accurately sum up my feelings and thoughts on this absolutely amazing book? I fear that I won’t adequately be able to express exactly what I’m feeling, or – perhaps even worse – simply descend into fangirl ravings. So let me say this to start, just in case things get out of hand: this was everything I could have asked for and desired in a sequel to a book I adored, and has cemented Leigh Bardugo as one of my absolute favorite authors. Make of that what you will!

There is such amazing character development in this sequel, to the point where I really found myself understanding character motivations and the ways their lives and the situations of the stories have entwined them together. Alina, in particular, is so much stronger in this installment, really embracing her power and abilities and wanting to make up for the occurrence at the end of the first book. There are a lot of parallels drawn between her and the Darkling, and I personally found them fascinating, particularly when he so often echoes her thoughts. These parallels are part of the reason she and Mal start to grow apart, though, not only because Mal isn’t keen on Alina’s powers, but because her being Grisha places them on different societal levels, which come with their own mix of issues in this magical world of Ravka. There is a lot of talk of people’s place in society, all of which I personally found very interesting, especially when all of these characters all have roles to play.

The Darkling continues to be as alluring as ever, but with an added edge of darkness and danger that makes him very scary to behold. And yet, Alina continues to be drawn to him, and the phrase “like calls to like” comes up quite often. I still cannot help but want more Darkling, even when he’s doing truly horrific things. It’s for this reason that I was glad that – while Sturmhond is more physically present in this book than the Darkling – the Darkling is still very much a fixture in Alina’s thoughts, even when he’s not there in the flesh. And when he IS there? Oh, good Lord. How he manages to be sexy and evil at the same time shall forever be a mystery to me.

“So you don’t trust me to resist [Sturmhond’s] charms?”

“I don’t even trust myself. … I’m pretty sure the rocks and trees are getting ready to swear fealty to him.” – 41%

But the showstopper of this book is definitely the dashing, egotistical privateer named Sturmhond, who has a habit of stealing every single scene he’s a part of. While he isn’t as magnetic as the Darkling, he had a way of making me smile and laugh every single time he opened his mouth. Some of my favorite lines came out of his mouth, and I really just liked watching his interactions with Alina. For someone who’s actually quite untrustworthy, he sure has a way of putting folks at ease, which – of course – is the true mark of a con man. His conversations with Alina were the kind that made you think, even when you wanted to also smack him, and really made Alina do a lot of personal contemplation and introspection. Without him, I don’t know that we would have gotten as much development from her, which would have been a real shame, because her growth was one of the strongest parts of this book.

One thing I was not expecting was how emotionally heart-wrenching much of this book is. The difficulties between Alina and Mal actually hurt you to read in some places, particularly since it’s so obvious just how much they love each other. Even with the abundance of potential love interests, it’s very clear who Alina would choose if things like power and status weren’t an issue and Mal weren’t suffering so badly with his current place in life. I think it’s worse than most books because there is no easy fix here, which makes their struggles even harder to witness. Their relationship makes me very nervous and I fear for what Ms. Bardugo has in store for those of us who just want them to fix the cracks and make it work.

Siege and Storm is definitely a case of a second book that outshines its predecessor. Fear not, fellow readers: there is no middle-book syndrome here. The action is ratcheted up, the stakes are higher, the danger and intrigue never-ending. Alina has some very serious obstacles that she’s going to have to overcome, and I, for one, shall be eagerly anticipating the final installment of this amazing trilogy. I don’t know how the series can get even better, but if this book is any indication, Ruin and Rising is going to absolutely blow our minds!

7 Responses to REVIEW: Siege and Storm by Leigh Bardugo